Things are continually changing in the archipelago and banking is no exception. We have already stated that when Sterling was strong against the Euro, that you could make two 20,000 CVE ATM withdrawals in one day, 20,000 CVE being the machine dispense limit and 40,000 CVE being your card limit. These were the days when it was free to withdrawal cash. With Sterling’s devaluation, we found that a lower 30,000 CVE daily card limit was in force, mandating a 20,000 CVE and a 10,000 CVE maximum daily banking limit.

Sometime within the past two years, all the banks started to apply a charge of 165 CVE per transaction. That meant that whether you withdrew 10,000 CVE or 20,000 CVE, the static 165 CVE would apply. You don’t have to be a mathematician to appreciate that it more expensive to withdraw lower values from the ATM. Our logic therefore was to now make only a 20,000 CVE withdrawal, visiting the banks more often. 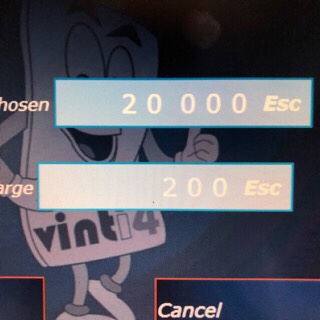 Not only were the Cape Verdean banks applying a charge, but both my UK banks too were making a transaction charge together with their currency rate. Already things were now becoming expensive to withdraw local currency, but sometime around February/March 2018, the Cape Verdean banks have increased this 165 CVE charge to 200 CVE.

We have already discussed the whole 1 Euro equals 100 CVE in local transaction and thus paying in Euro could lose you 10%. However, if there is now a 200 CVE ATM charge to withdraw 20,000 CVE, this does now equal any Euro to Escudo offset. Indeed, if you withdrew less than 20,000 CVE, your static 200 CVE ATM charge would dictate a higher percentage.

So, what are the options?

If you are resident of a European country which has the Euro as it’s currently, then I would recommend taking Euro. As some establishments still equate 1 Euro as 110 CVE, you will not be at any loss. If you make a withdrawal of Escudo, you will be charged 200 CVE which immediately puts you on a 1 Euro equals 100 CVE, but you will lose if any such establishment equates 1 Euro as 110 CVE.

If you are British or use Sterling as a currency, then it may also be more appropriate to bring Euro with you rather than withdraw Escudo. The observation here is how much your bank charges on static fees and exchange rates. This maybe a little trial and error, but as we have a Euro current account as well, I know there are no fees and can take advantage of favoured exchange rates between my Sterling and Euro accounts, this also maybe a favoured solution in the future to bring Euro cash than make in resort CVE withdrawals.

The other open of course is to open a Cape Verdean bank account which will negate this 200 CVE withdrawal. I had done this once before, but as my bank changed £25.00 Sterling for every transfer and the Cape Verdean online banking system was leas that intuitive, we closed our CVE bank account many years ago.

Yesterday, the proprietors announced that although still open, that the City Hall has now cancelled three meetings where they had hopes to present their case and agree a compromised solution to both sides

Times are changing here on Sal and it seems too, the same on Boa Vista. It seems the tourist is seen as the cash cow and it’s time to become more savvy.

Man Arrested On Island Of Maio For Butchering Tutle

A 35 year old local man was arrested this Sunday 25th August around 1.00pm by the National Police in Porto Inglês, Maio while butchering a sea turtle.